My reading of Treasury material in the last decade on whether high government spending harms economic growth is that size doesn’t matter in its view – the public sector can in principle spend taxpayers’ money as well as they can spend it themselves.

This view implicitly holds that the government is not constrained by problems of information and incentives.  Therefore if there is a problem it is only because not enough is being spent on ‘productive’ categories of spending and too much on ‘unproductive’ categories.  Treasury papers have also been at pains to make the trite observations that government spending can be too low as well as too high, and that the quality of spending matters, which of course it does.

Treasury has never engaged with a point the Business Roundtable has made countless times, namely that no OECD country with government spending over 40 percent of GDP has achieved sustained annual per capita GDP growth of 4 percent or more – the kind of growth rate necessary if New Zealand is to climb back to the top half of the OECD income range (the last Labour government’s goal) or to catch up to Australian income levels by 2025 (the current government’s goal).

This month the Treasury has released the paper Government and economic growth: Does size matter?  It is a slight advance on previous efforts.

In its two reports to date, the 2025 Taskforce has been in no doubt that the answer to this question is ‘yes’.  It said in its first report:

Our judgement, informed by a reading of the international historical experience, is that it would be almost impossible to achieve the sort of sustained transformation of our growth performance with the size of government at current levels (around 45 percent of GDP).

In its latest paper the Treasury still cannot bring itself to endorse this obvious conclusion.

The Treasury paper appears to be poorly researched.  For example, it does not cite a 2010 book by Andreas Bergh and Magnus Hendrekson on the very same topic, Government Size and Implications for Economic Growth.  The key conclusion of these authors is that in rich countries, a 10 percentage points increase in tax revenue as a share of GDP (say from 30 to 40 percent) leads to annual economic growth being between one half and one percentage point lower – a large reduction.

Even more curiously, the paper does not cite the study How Much Government: The Effects of High Government Spending on Economic Performance published by the Business Roundtable.  The author was Winton Bates, previously a senior official in the Australian Productivity Commission, a consultant at the New Zealand Treasury, and an adviser to the 2025 Taskforce.  Bates’ “conservative” estimate was that “a reduction in government spending from 40 to 30 percent of GDP could be expected to add about 0.5 percent to the rate of growth of GDP over about a decade.”

A subsequent Business Roundtable study by Bryce Wilkinson Restraining Leviathan, which had much to say on the subject, is also not cited.

Nor, when it comes to discussing public sector productivity, did the paper cite the Business Roundtable study overseen by former Treasury secretary Graham Scott, Productivity Performance of New Zealand Public Hospitals 1998/99 to 2005/06, authored by Mani Maniparathy.  It concluded, among other things, that overall productivity of personnel in public hospitals actually decreased by 8 percent in the five years to 2005/06.

The paper even fails to note research that the Treasury commissioned itself from Australian economist Ted Sieper which argued that the provision of public goods and a modest safety net  in New Zealand would require government spending of no more than 14-15 percent of GDP.

The following table from the 2025 Taskforce’s second report shows that this is not an unreasonable estimate.  Government spending today is as high as it is largely because of the level of government spending on ‘social assistance’.  Much of this spending presumes that governments can spend taxpayers’ money on health, education and welfare services better than individuals and households.   This presumption took over the Western world around the 1960s, as has been documented by Tanzi and Schuknecht. It is dubious to say the least. 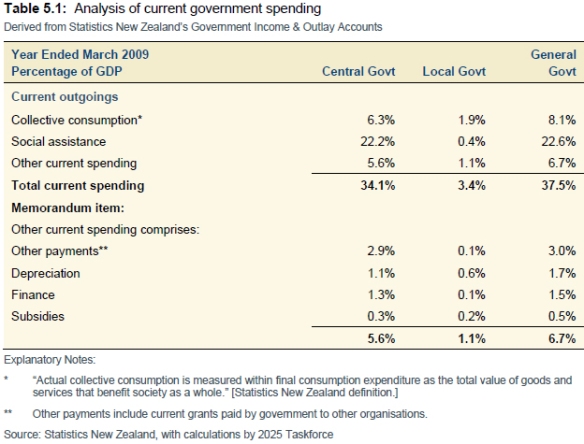 Furthermore, the Treasury’s examination of the ways in which government spending may harm growth is much too narrow.  Winton Bates noted that “Big government adversely affects economic performance in many different ways”, and listed some as follows:

The Treasury’s focus is almost exclusively on deadweight costs and public sector productivity.  The omission of any material discussion of rent-seeking, and public choice issues in general, is extremely important.  The Treasury’s general framework presumes that governments spend money in order to overcome ‘market failures’ and fails to consider the more plausible proposition that they spend money in order to get re-elected or to favour their most important constituencies.  There is no assessment of the level of spending that could be justified on genuine public interest grounds.  Basically, incentives in the government sector are not a problem, so the paper implicitly assumes.

Another serious weakness of the paper is that its benchmarks are OECD countries in their modern, typically big-government, form.  Nowhere is there any recognition of the current reality that the majority of the Western welfare states are in deep economic trouble and the model may well prove to definitively broken.  The 2025 Taskforce in its first report pointed out that the average OECD country:

… isn’t the only model.  In several high-performing Asian economies (Singapore, Hong Kong and Taiwan), themselves with diverse political systems and spending imperatives, total government spending as a share of GDP has consistently been less than 20 percent.

These high-income countries, and other emerging economies, are more likely to offer lessons for New Zealand than the ‘old’ OECD.

Another frame of reference (missing in the paper) would be the performance of today’s OECD countries when the share of government in their economies was much smaller. In the 1950s and 1960s, for example, many of these countries had government spending ratios of around 25 percent. They also enjoyed much faster growth rates.

There are sundry other problems with the paper.  In discussing the Baumol hypothesis for creep in the size of government, it fails to consider why it did not apply in local government for at least a century.  It accepts ‘merit goods’ as a justification for government spending whereas many economists have jettisoned this idea.

Needless to say, there are useful observations in the paper.

It is dismissive of the Wilkinson and Pickett inequality argument and is supportive of privatisation.  It also mentions the bias toward big government of MMP:

The larger the number of parties forming the government and the higher the frequency of elections, the stronger this tendency. It also seems more prevalent in cases of proportional rather than majority-based election systems (for example, see Persson and Tabellini, 1999, 2002).

Overall, my judgment is that the paper is an advance on earlier Treasury work in the area.  But that is faint praise. Both theory and evidence indicate that government spending around New Zealand’s level is seriously detrimental to growth.  I hope some New Zealand academics join in with critiques.