A picture can tell as much as a thousand words. Here is a chart from a talk given by Andrew Kibblewhite, deputy chief executive of the Treasury, to the Institute of Policy Studies on 1 April this year. 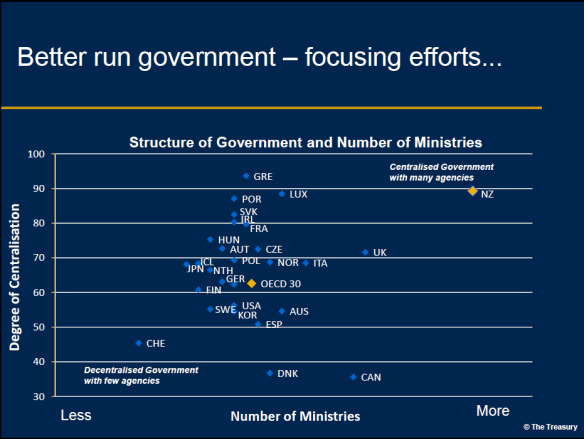 In Mr Kibblewhite’s words, “This chart underscores just how comprehensively our small country has divvied up our state sector into a clutter of agencies.”

The government has embarked on some restructuring and mergers, but in my experience the gains from such efforts over the years have not been great. An article in today’s Business Herald suggests we may be seeing the same thing this time round. It reads:

The merger of the Department of Internal Affairs, National Library and Archives New Zealand; the coming-together of the Ministry of Agriculture and Forestry and the Food Safety Authority; and the merger of the Ministry of Research, Science and Technology  and the Foundation for Research, Science and Technology have gone relatively smoothly. The $24 million in savings over four years was originally going to be offset by some $11 million in transition costs. Now, though, the agencies have had to find another $8 million in capital expenditure from within their balance sheets to “provide the necessary infrastructure and capability” – much of which can be translated as “none of our computer systems will work with each other”.

Two things in my view are much more important than rearranging the bureaucratic furniture.

The first question that should be asked is whether we need parts of the furniture at all.
On coming to office John Key as minister of tourism abolished the Ministry of Tourism.  Has anybody noticed or cared?

Second, instead of focusing on restructuring the bureaucracy (often by establishing advisory groups of bureaucrats), the government would do better to focus on leadership by top quality CEOs. Numerous appointments in recent years have been unimpressive, and there has been little sign of the State Services Commission moving poor performers on. The government would find that top CEOs would solve many of the problems of bureaucratic sprawl and inflated headcounts by themselves.