A pleasing emphasis in them is the urgent need to switch resources from the non-traded goods sector of the economy to internationally competing industries.  With its high levels of foreign debt arising from successive current account deficits, New Zealand is exposed to external economic shocks.

Finance minister Bill English has been emphasising the need for economic rebalancing in the light of the trends illustrated in this familiar graph used by John Whitehead. 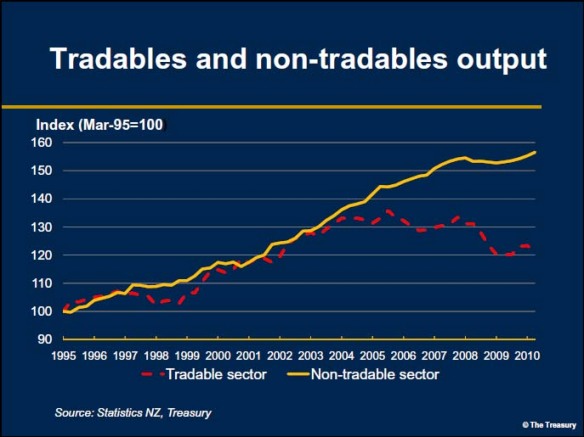 This emphasis was not a feature of earlier Treasury advice, for example its briefing to the incoming government in 2008.  Like former finance minister Michael Cullen, it primarily associated the current account deficits with allegedly low national savings rather than a combination of factors relating to competitiveness and the extent of overseas ownership in New Zealand. .

So a bouquet for this new emphasis.

But the breakthrough is only a partial one.  This chart used in John Whitehead’s 18 November speech, which purports to show what “we have been consuming” relative to the “income that we have been generating”, is misleading. 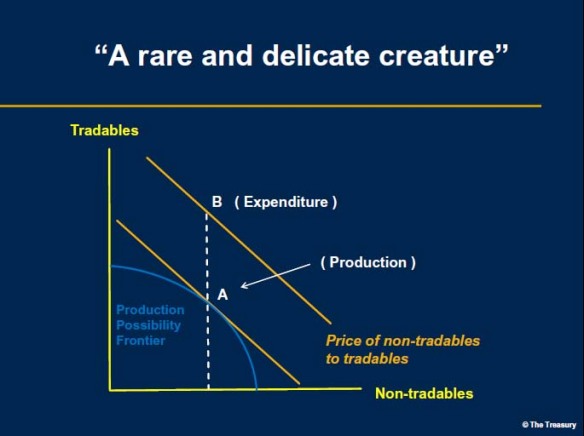 To describe point B as being a point of consumption and to position it above the point of production or income (point A) invites the unwitting reader to infer that New Zealanders have typically been dissaving.  This is not the case.  National savings have been positive annually, with very few exceptions.

But as it happens, contrary to the representation in the diagram, point B has not been above point A on average for at least the last 20 years.   A glance at this graph shows that on average over the period the value of exports of goods and services has marginally exceeded the value of imports.  This implies that on average in this period point B on the chart has been below point A, not above it. 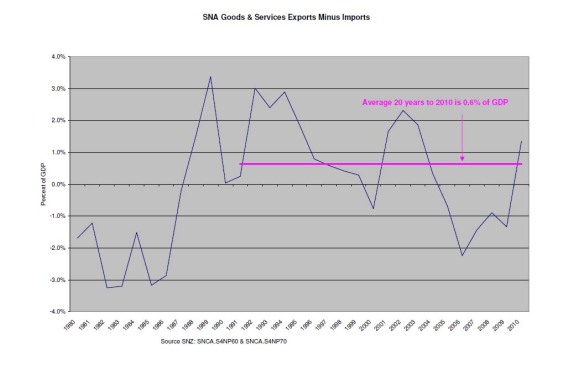 Or to put it another way, gross national spending has on average been less than gross domestic product.

Instead the largish deficits in the current account of the balance of payments in the last 20 years have been primarily associated with a highish proportion of New Zealand GDP that belongs to foreigners (through direct and indirect investment).  This gives rise to the gap between GDP (the income generated from production in New Zealand) and GNI (the gross national income accruing to New Zealanders.

This second chart indicates that this gap between GDP and GNI opened up markedly in the early-mid 1980s when the cumulative effects of heavy overseas borrowing following the 1973-74 oil shock, the 1984 currency devaluation and the realisation of heavy taxpayer losses on guarantees for major projects all came to a head. 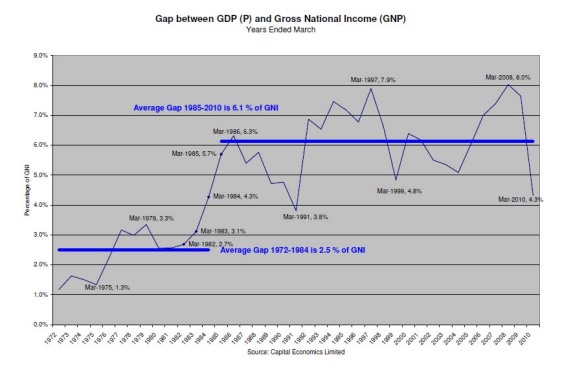 Of course these two charts do not constitute a thorough analysis but they raise questions about the quality of the Treasury’s assessment of the issue.

Other aspects of the Treasury’s analysis of savings and current account issues were criticised in this  Business Roundtable submission to the Savings Working Group.

Misdiagnoses of economic issues matter because they can lead to bad policy, such as the savings interventions of the last government.

This is a chart from a talk by Secretary to the Treasury John Whitehead last week.

It pinpoints a major economic weakness – the fact that the tradable sector of the economy (industries that export or compete with imports) has been largely stagnant over the past decade, while the non-tradable sector, of which the public sector is a large part, expanded.

One outcome is the large current account deficits prior to the GFC.  In the previous decade the growth of the two sectors was much more balanced.

Former finance minister Michael Cullen wrongly interpreted the external deficits as a savings deficiency on the part of New Zealanders.  A more important factor was the loss of international competitiveness as excessive government spending put pressure on interest rates and the exchange rate.

Reining in government spending is the single most important action the government can take to improve international competitiveness and export sector profitability and growth.

As John Whitehead warned, we are not as yet seeing the significant rebalancing needed in the economy – the shift of resources to tradables. 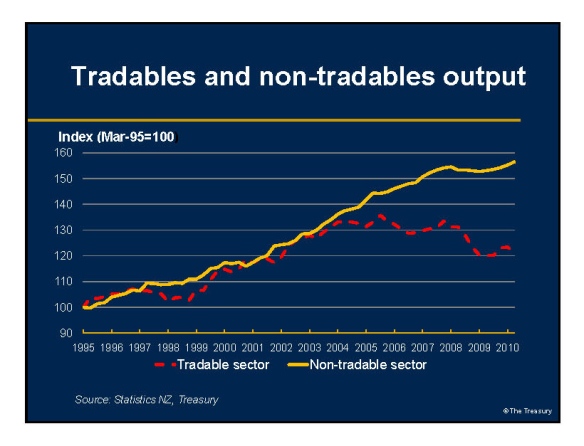